Dirt’s Monster Half-Mile was the place to be on Saturday night for Rohrich Automotive Night, as well as Champions Night where we honored our 2021 track champions and two through tenth place for each division. The Cheplic Packing Hobby Stock Series race number two would headline the night. PPMS would see nine heat races, and eight feature events including a makeup feature from 5.21. Justin Shea (14S), from Sharpsville, would win the makeup feature for the RUSH Sportsman Modifieds. Cody Koteles (1K), from Stockdale, would win the Cheplic Packing Hobby Stock Series race number two taking home $500 for his efforts. Garrett Krummert (10S), from Ellwood City, would win the regular feature for the RUSH Sportsman Modifieds, while Chad Ruhlman (68) continued his domination in the RUSH Sprint Car division picking up another win. Philip Bubeck (4), from Colliers, West Virginia, got his first career RUSH Late Model win, while Jordan Perkins (13J), from New Castle, got win number two of the season when he won the Penn Ohio Pro Stock feature. Bill Tennant (2), from Colliers, West Virginia, won the Crawford Auto Repair Four-Cylinder feature, and Travis Clark (05T), from Pittsburgh, brought home another win for the All Ways Safe Young Guns.

The RUSH Sportsman Modified 15-lap makeup feature from May 21 would start seven cars with Chelsie Kriegisch (10), from Ellwood City on the pole. Starting next to her in second was Kole Holden (2), from Tiona. The second row consisted of Ayden Cipriano (5C), and Justin Shea (14S). When the flagman dropped the green, Kriegisch (10), Cipriano (5C), and Holden (2) would go three wide through turns one and two. At the line on lap one, Holden (2) would have the lead with Shea (14S) behind him in second, Kriegisch (10) in third, and Cipriano (5C) in fourth. The top four would remain the same for several laps during the first half of the race. With Holden leading (2), Shea (14S) would hit the wall coming out of turn four as he was holding down the second spot but he managed to keep going and also keep his position. With five laps to go in the event, Shea (14S) began to reel in Holden (2) and with four laps to go, Shea (14S) would take over the lead. Holden (2) would enter the pits with an unknown car issue on the final lap as Shea (14S) cruised to the checkered flag. He was followed by Kriegisch (10) in second, Cipriano (5C) in third, Tony Tatgenhorst (63T) in fourth, Jacob Jordan (28J) in fifth, Lucas Canon (2LC) in sixth, and Holden (2) in seventh.

Next up was the Rohrich RUSH Late Model Dirt Series 20-lap feature and Phillip Bubeck (4) would start on the pole. Starting to his outside was Tim Shaffer (45), from Aliquippa. Daryl Charlier (3RK), from Midway, and Zach Morrow (5X), from Gibsonia, would make up the second row. At the start, Bubeck (4) would pull away with the early lead. In the first few laps, it appeared that Bubeck (4) had car trouble as he fell off the pace but kept going and didn’t lose the lead. Lap four had Bubeck (4) leading, Shaffer (45) in second, Charlier (3RK) in third, Colby Beighey (36) in fourth, and Mike Reft (9R) in fifth. Lap six would bring lapped traffic to the front-runners and at the halfway point, the top five remained the same. Charlier (3RK) would take the second spot from Shaffer (45) on lap 13 and set his sights on the leader. Charlier (3RK) was closing the gap on the leader but on lap 18 he was forced to enter the pits with an unknown car issue. It looked like Bubeck (4) had the win in the bag but a lap 19 caution would slow the pace and rerack the field. Bubeck (4) chose the outside on the restart and on the first attempt at green, track officials called a no-start for passing before the cone. On the second attempt, Bubeck (4) would keep his lead for the two-lap shootout. Bubeck (4) would lead the final two laps of the race and pick up his first Rorich RUSH Late Model win. Shaffer (45) finished second, Reft (9C) third, Colby Beighey (36) fourth, and Dave Goble (20G) would complete the top five. The heat race winners were Bubeck (4) and Morrow (5X). The hard charger went to Reft (9C) as he started P8 and finished P3 gaining 5 spots.

In the Cheplic Packing Hobby Stock Series feature, cautions were the name of the game. Adam Ferree (29), from Jefferson Hills, would start on the pole with Jonathan Koteles (2K), from Stockdale, to his outside in second. Gary Koteles (65K), from Stockdale, would start in third, and Frank Magill (05), from Jefferson Hills, would start fourth. When the green flag dropped, it was a mad dash to see who could come out on top as the field roared through turns one and two. G. Koteles (65K) would come away with the lead on lap one but the first caution would come on lap two when a car spun out in turn four. G. Koteles (65K) would take the outside on the restart with Ferree (29) in second, Cody Koteles (1K) in third, F. Magill (05) in fourth, and last week’s winner, Logan Koteles (64K) holding down the fifth spot. G. Koteles (65K) would keep his lead when green replaced yellow with C. Koteles (1K) following him into second. C. Koteles (1K) would begin to pressure his dad for the lead as they battled for several laps until lap nine when C. Koteles (1K) would take the lead away from him. Another caution would come on that same lap nine for a car that spun out between turns three and four. C. Koteles (1K) would take the outside on the restart but before the field could complete a lap, the caution was back out for the 44 of Cameron Hollister who spun out. On the next attempt at green, the start was called back by track officials for several drivers who jumped the start. When the field was finally able to return to green flag conditions, C. Koteles (1K) would keep his lead and F. Magill (05) would follow him into second. Lap 12 brought another caution for a car that spun out on the low side between turns three and four. With three laps to go, C. Koteles (1K) would take the outside on the restart and he would again keep his lead over the field. He would lead the final laps of the event to win the Cheplic Packing Hobby Stock Series race number two. He was followed by F. Magill (05) in second, G. Koteles (65K) in third, Matt Benard (15) in fourth, and Logan Koteles (64K) in fifth. The heat race winners were Cody Koteles (1K) and Logan Koteles (64K). The hard charger was Cody Koteles (1K) as he started P7 and finished P1 gaining 6 spots.

The RUSH Modifieds would enter the track next for their 15-lap feature and JC Boyer (12), from Burghill, Ohio, would start on the pole. To his outside was Garrett Krummert (10S). The second row had Tony Tatgenhorst (63T), from Columbiana, Ohio starting third, and Chelsie Kriegisch (10), from Ellwood City, starting fourth. When the green flag waved, Krummertt (10S) would pull away with the lead. Lap three had Krummert (10S), JC Boyer (12), and Tatgenhorst (63T) running one, two, and three. By lap six, Krummert (10S) had a full straight away lead over the field. He would also enter lapped traffic on lap 10 as he was lapping the seventh place car. By lap 12, Krummert’s (10S) lead had grown to about half of the race track. He would eventually lap the sixth place car and go on to take the checkered flag. He was followed by Boyer (12) in second, Tatgenhorst (63T) in third, Cipriano (5C) in fourth, and Kriegisch (10) in fifth. The heat race winner was Krummert (10S). The hard charger would go to Cipriano (5C) as he started in P7 and finished P4 gaining three spots.

The RUSH Sprint Car 15-lap feature would start nine cars and Nolan Groves (25) would start on the pole. Brian Hartzell (6), from Oil City, would start on the outside in second place. Row two had Blaze Meyers (43JR), from Franklin, in third, and Chad Ruhlman (68) in fourth. When the green flag dropped, Ruhlman (68) would take over the lead by the end of lap one and Meyers (43JR) would follow him into second. The race would go green to checkered in record fashion with Ruhlman (68) picking up another RUSH Sprint Car win at PPMS. He was followed by Meyers (43JR) in second, Hartzell (69) in third, Groves (25) in fourth, and Brian Cressley (62) in fifth. The heat race winner was Ruhlman (68) and he was also the hard charger.

The Penn Ohio Pro Stock 15-lap feature was up next and AJ Poljak (36) from Baldwin, would start on the pole. Brian Huchko (60H), from Coraopolis, would line up next to him in second place. Row two had Jordan Perkins (13J) in third and Nick Kocuba (10), from Burgettstown, in fourth. Poljak (36) would keep the early lead and lead through lap five. Perkins (13J) would take over second only a few laps in and he would pass Poljak (36) for the lead on lap five. This race would also end in record fashion with Perkins leading the remaining 10 laps. He picked up his second win of the season and was followed by Poljak (36) in second, Huchko (60H) in third, Kocuba (10) fourth, and Heath Close (77H) fifth. The heat race winner was Huchko (60H), and the hard charger was Perkins (13J).

Racing resumes at Dirt’s Monster Half-Mile next Saturday June 18 when the fastest cars on dirt come to PPMS for Falconi’s Moon Township Automotive 410 Outlaw Winged Sprint Car Series. Also on the card will be the RUSH Dirt Late Model Series, the Penn Ohio Pro Stocks, the Cheplic Packing Hobby Stocks, the Crawford Auto Repair Four-Cylinders (make up feature also), and the All Ways Safe Young Guns. Gates open at 5 p.m., hot laps begin at 6 p.m., and the racing action will begin at 7 p.m. Visit the schedule section for pricing and tickets. PPMS has a GPS address of 170 Kelso Rd Imperial PA, 15126, and is located off of the Noblestown Exit of 22/30. 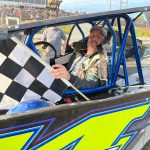 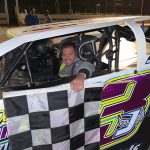 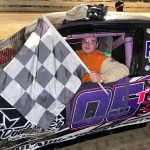 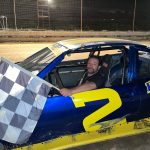